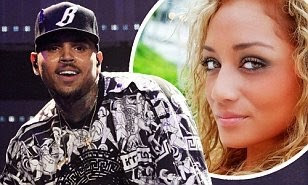 Dealing with a baby mama and baby mama drama is no fun, and making matters even worse, Chris Brown is now being threatened by his baby mama’s ex-husband.According to a new report from TMZ, Nia’s ex-husband Terry Avery has warned Breezy to watch his temper, or else…After being married from 2003-2014, Terry divorced Nia last year, and has revealed that they have a 13-year-old daughter together.


They were separated when baby Royalty was conceived and since he knew it wasn’t his baby, he finally filed for divorce -- but he had NO idea Breezy was the father. TMZ reported that “he’s [Terry’s] aware of Chris notorious temper and says he better not lose it around Nia and the kids, or there will be repercussions." This is going to be one helluva drama-filled situation! On Saturday (March 7), it was revealed that Chris is planning to take Nia to family court to deal with child support.